DVD: The Interview in the Central Courtyard of Kaphof Manor at Hückelhoven, Germany 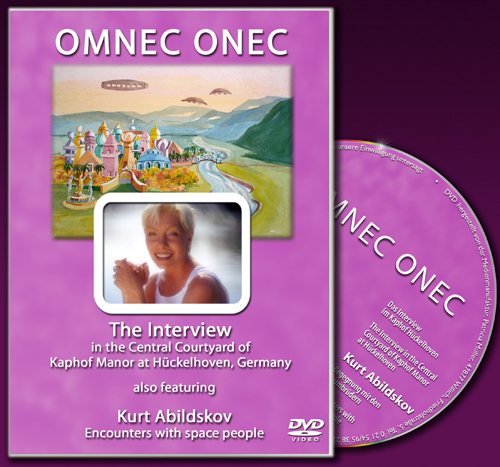 DVD: The interview in the Central Courtyard of Kaphof Manor at Hückelhoven, Germany

Although Omnec Onec had never lived permanently in Germany, she had spent much time in the German speaking countries between 1994 and 2004 working publicly as a spiritual teacher and giving many lectures and workshops.

While Omnec was living at the Kaphof in Germany (between 2001 and 2004), the independent filmmaker Patricia Müller from PARA-VIDEO took the chance and asked her for an interview. Now, almost 10 years have passed until this interview has been published, but the contents of this unique recording are timeless and very interesting.

Now, this interview is available in English and German. The DVD can only be ordered directly at Patricia Müller. You find a detailed DVD-description as well as the order information below.

I hope you enjoy watching this very private and informative DVD with Omnec Onec!

I send you all my love and blessings and wish you a really happy and healthy New Year 2014!

Hueckelhoven is a small village located between Aachen and Mönchengladbach in Germany. Just outside the town Kaphof manor is layn where Omnec Onec used to live a few years ago for a few months in every year. Omnec Onec was born on planet Venus. She tells us about her life on Venus. In the interview we talk about life on the astral plane of Venus, hollow worlds, manifesting by thoughts, the cosmic origin of the human races, the relief efforts of the extraterrestrials, the transformation process of earth and about many more items.

Kurt Abildskov is a former pilot and lieutenant colonel of the Danish Air Force. UFOs and the space people are his special field. Even Kurt had contact to Venusians. We went to Ebeltoft in Denmark and conducted an interview with him.

You can order the DVD only from: