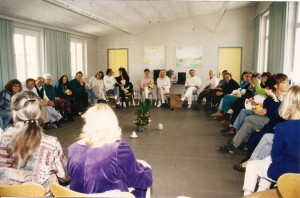 Operation Peace Programme has been established for supporting the healing and the transformation of the Earth.
Omnec received this idea in the beginning of the nineties from her spiritual masters:

“I was asked to create a meditation by the spiritual hierarchy and my people. All I had to do was choose a day, and I got a group together from all over Europe, and all ages, children up to adults, and older people. We decided that we would choose a day during the week, because that didn’t interfere with the holidays of the churches and the organized religions, where that most people put their attention on church and prayer and attending services. So we chose a day between Monday and Friday. Everybody wrote their request on a piece of paper. Some people thought Monday, the beginning of the week, was the best, some thought Friday, because it was the end of the week. Everybody had their own ideas. I decided on Wednesday, because it’s a neutral day, it’s in the middle of the week. Apparently, when we counted the votes, there was more requests for Wednesday. So Wednesday became the chosen day for what we call “Operation Peace”.

I chose this name, because everybody takes 10 minutes in their own time, and focuses their attention on peace for this Earth, and healing the Earth. You can chose any kind of project, you can take the rainforest, you can take the whales, you can take different projects that envolve the Earth, or you can just picture the whole Earth itself.

You do a 10-minutes-meditation. And this day, everybody choses their own time, there is not a set time, because everybody has different schedules, and different time sequences all over the world, there are different times. So we didn’t set a certain time, we leave it up to the individual to chose 10 minutes when they have the free time and quiet to do this. Some people get together on every Wednesday, and then they chose to listen to maybe my CD or so, and then afterwards they do a group meditation and visualize peace on the Earth. This started, I think it was in 1992, I am not really sure of the date.

I was also advised that if I created a day and requested that everybody meditates that the beings on the higher dimensions would also participate with their energy to the Earth, so that we could create a spiritual group consciousness, an united consciousness, where that we are all focusing our energy, our meditation, or prayers which ever way you decide to do it of sending healing energy to this Earth. It has been quite successful, it has been going on for years.

That was just to show the people what 10 minutes of really focusing their attention on one project, and it didn’t matter where you were in the world or what time of the day. So it creates a 24-hours cycle of meditation on Wednesday. If you have been given the different time sites all over the Earth.

It has been very successful. It doesn’t take much energy and much time, and everybody is interested in peace and in healing the Earth. It doesn’t interfere with religious beliefs or anything.

I believe, that every person has the right to choose a certain religion if they do and if they want. I don’t say anything is good or bad, because that’s not my decision to make. So we created this one day. I found out later, that this was part of the transformation process. It was part of teaching the people how that they could be involved even if they don’t really do much.

It only takes a little effort and a little concentration and discipline that every Wednesday you can remember, this is Operation Peace-Day, so your mind is on it and you are thinking about it. So now it’s a special day.

That was one project that I found out later on, was a part of the Transformation of the Earth.