THE VENUSIAN TRILOGY is available now! 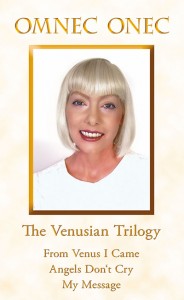 One year after the publication of the German edition, the English version all of Omnec’s three books is available as a compilation edition with the title THE VENUSIAN TRILOGY.

This is a milestone in the history of Omnec’s public work, as throughout the last 15 years Omnec’s books were available in German only. (Although there is one edition of Omnec’s autobiography FROM VENUS I CAME printed, but I say it openly that this book is not an authorized version and that Omnec does not receive royalties on the sales. We all hope that one day this subject can be clarified.)

In 2009, Omnec signed a contract with her new publisher in Liechtenstein DAS GUTE BUCH. This concerns the autobiographical works FROM VENUS I CAME and ANGELS DON’T CRY as well as the essence of Omnec’s spiritual teachings titled the HANDBOOK OF VENUSIAN SPIRITUALITY (new title “MY MESSAGE”) and counts for all languages except for Japanese (the contract with Japan existed already before 2009).